First,a little bit about the background of the society. We formed in 1978, at a time when much was happening in Denton. Work was going on in preparation for the M67 Motorway, with the demolition of many homes and factories, etc, resulting in the changing face of a large part of the town. You will no doubt remember the familiar sight, and disturbing sounds, of pile-driving, large lorries and excavators all over the place. We sought to record as much as we could, at this time.

In addition, the remaining part of Denton Hall, the East Wing,was threatened, and we tried to keep it for the benefit of the people of Denton. There were beautifully carved beams in the building, and it was believed to have been the chapel, to the hall, originally, although for many years it had been used simply as a farm building. The Holland family who lived at Denton Hall, which was built In the late 1400's, were one of the families who built St. Lawrence's Church. We lost that battle,in 1979, and the East Wing was demolished and re-erected in Cheshire.

Over the past years, there has been re-development going on around the town. A retail park has been built on and around the site of Wilton Street, the main hatting area of the town. A Morrison's store opened near Crown Point, along Hyde Road, and Stockport Road, and Oldham Batteries site has been sold, although we do not know yet what will be built there. So we have much to do in photo graphing and recording the places that will disappear. The developers of the Wilton Street site are being very co-operative, in allowing us to go round vacated factories etc, under supervision.

At the moment we have about fifty members, mostly local, but some as far apart as Torquay, Oxon, North Yorkshire, Lichfield, and even the USA and New Zealand. Dentonians in exile, of course.

We meet twice monthly, (sometimes extra meetings are necessary), once for a 'workshop' evening, preparing for exhibitions etc, and the other when we have a speaker. We also have visits to places of interest.
In future articles, I will keep you up to date with our activities, and write about some aspects of our town's history.

Nearly thirty years ago, Denton was changing rapidly. The M67 was about to cut a swathe through the town from east to west and whole streets, as well as important buildings, were being demolished. Among these were hat factories, Christ Church and Russell Scott schools, public houses, Russell Scott’s family home and many more.The task of recording all these was overwhelming and so, in June 1978, a small group met at the Festival Hall and Denton Local History Society was born.

Although the group was small, commitment was high. As well as recording all the motorwaywork, the society was asked to exhibit at Denton Show that same September. So began an annual contribution to the show.

At the same time,word came in that the last portion of Denton Hall was being vandalised and the fabric robbed. A long fight began to save the site and the remaining East Wing of the old hall. The next two years saw the society carry out an archaeological dig on the site, as well as recording the building, before it was removed to Alderley Edge, piece by piece. Some years later a final dig was carried out by Greater Manchester Archaeological Unit before the site was developed.

From the first it was decided that the society should not just be a group which met to listen to speakers, but a working society with an archive and collection of exhibits. Workshops have always been held monthly, so that members can carry out their own research and prepare for exhibitions and the society archive is open to other researchers. Outings, guest speakers, public meetings, school talks and exhibitions have all been high on the agenda. The society is proud of its increasing number of maps and books about Denton and Haughton and the surrounding area.

Recent years have seen further considerable development around the town which has kept members busy. In the early 1990s the area of Debdale Vale, including the two golf courses and reservoirs with their old farmhouses and other buildings, was to be developed as Kingswater. The society researched and recorded the area and produced a booklet called Kingswater. Crown Point North, a large shopping mall,was built around the Wilton Street area, formerly the main hatting centre of the town. That development included also the demolition of Wilton Street Unitarian Chapel as well as factories and houses.Much recording had to be done there, helped by the fact that the developers gave their full cooperation. The results of our research were two signage boards provided by the developers and our book Hats Off To Wilton Street.

Two coats of arms and a decorative pediment from local hatworks were saved and displayed in the new development. To the south-east of Crown Point, a Morrison superstore displaced other business premises, and some of the terracotta embellishments from the front facade of Booth and Moores’ hatworks, erected in 1862,were incorporated into the new building. Francis Kirk and Son Ltd, Mill Furnishers, who had traded from part of that site since 1868, had to be re-located.Morrisons worked with us to reproduce early photographs of that area and beautiful glass windows etched with scenes of hatting processes. Starting in 2006 and culminating in June 2007, the society undertook research into the history of Victoria Park,Denton, in readiness for the grand re-opening of the bandstand restored to its original state. Based on our research, two signage boards were erected in the park itself and school packs were produced. On the occasion of the re-opening members turned out in period costumes, since the park originally opened in 1913.

For those of us who were there at the start in 1978 and many who have joined us since, life has never been the same. A very busy, but enjoyable thirty years. The society is in good heart, although storage for our archives has always been a problem, which Tameside MBC and our District Assembly are currently trying to help us to resolve.

Attendance at meetings when we have a speaker is usually between twenty-five and thirty people, and they and members ‘in exile’ in other parts of the country and abroad, receive The Dentonian on a quarterly basis.

We miss the many friends who have made a significant contribution over the years but are no longer with us and we look forward to the next thirty years!

Document published by in the Tamside Alive History Issue 3.
Full issue can be viewed at tamesidehistoryforum.org.uk/hat2008pdf

Denton Local History Society Back in 1978 Denton was being cut in two by the construction of the M67. Countless homes, shops, hat works and also several churches and schools were being demolished. So we founded Denton Local History Society and work was begun immediately to record all we could. Simultaneously thieves robbed the roof oﬀ part of derelict Denton Hall. Thus began our fight to save the remaining East Wing and research and record the rest of the site. We lost the fight but at least we have full records and also organised an archaeological dig, during which the previously unknown moat was uncovered, containing timbers and artefacts from the earlier hall. One of our members created a perfect scale model of the main hall with which he gave illustrated talks.

This hectic start decided us to hold monthly workshops, creating an archive and collection of artefacts in rooms provided by our library. An invite to Denton Show started our yearly exhibitions. (We now have over 300 display cards). Then followed an Oral History Project: from childhood in the Boer War, through two World Wars to today. Publications came next for the History Press and commentaries for Godfrey Maps.

Challenges continued. In 1990 the proposed Kingswater development across Debdale Vale would have destroyed early landscape, routes, buildings and part of Nicoditch, all presently preserved on two golf courses. After concentrated research, our book helped the campaigners to stop the proposal.

In the early 2000s, the Crown Point North shopping centre warranted mass demolition around Wilton Street, centre of hat production in Denton, plus about 70 homes, a chapel and shops.The developers invited us to have access to record pre development and even to put some artefacts on permanent display. Two information boards were created with their help and our book ‘Hats Oﬀ to Wilton Street’ was produced to mark our 25th anniversary.

In 2006 we were part of the council’s bid to restore the bandstand in Victoria Park. Research into the park’s history followed, culminating in the installation of two information boards and our school pack presented to each local school. Dressed in period costume our society members processed in the park at the unveiling of the bandstand.

Our input into the town continues with school visits, exhibition loans, providing speakers and advice, and welcoming family and other researchers. Some of our members have produced more books for us recently. Our membership grows but we are all growing older! To celebrate 40 years as a society, we shall, as usual, take over historic St Lawrence’s Church (once a chapel of Ease for Manchester Parish) for a week this October to showcase a special exhibition on Hatting in Denton. Sadly we failed in the council led bid to create an outdoor Hatting Corridor by the park and town hall for various hatting related artefacts. A local school has taken up the idea in their bid and so we still hope and will celebrate by sharing our anniversary with the people of Denton and the local schools. 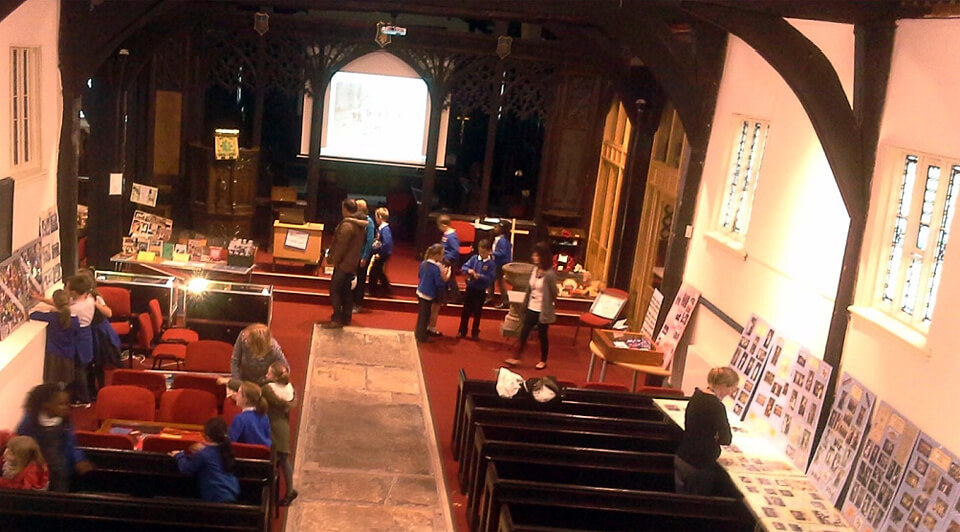 There are many "Dentons" in the UK and around the world, but we are the one in the borough of Tameside, Greater Manchester in the UK.

Tameside brings together nine towns of Ashton-under-Lyne, Hyde, Audenshaw, Droylsden,Dukinfield,Denton, Stalybridge, Mossley and Longdendale. Ashton-under-Lyne has been a market town for over 700 years, Mottram dates back to Norman times with 14th century development in Hyde and Tudor buildings in Denton and Stalybridge. It was during the Industrial Revolution, however, that small, rural settlements grew into thriving centres of commerce based mainly on cotton but also woollens, coal mining and metal trades.
Tameside has a strong manufacturing tradition, particularly in the areas of textiles and engineering, food industries and manufacturing of high technology chemical, electronic and computer products. The borough's service sector has also experienced continued growth and service industries now make up the largest employment sector in Tameside.